Arthur Conan Doyle’s Sherlock Holmes questions Inspector MacDonald, who has just been in Professor Moriarty’s room in Chapter 2 of The Valley of Fear from 1914:

"That painting was by Jean Baptiste Greuze."

"Jean Baptiste Greuze," Holmes continued, joining his finger tips and leaning well back in his chair, "was a French artist who flourished between the years 1750 and 1800. I allude, of course to his working career. Modern criticism has more than indorsed the high opinion formed of him by his contemporaries."

The inspector's eyes grew abstracted. "Hadn't we better--" he said.

"We are doing so," Holmes interrupted. "All that I am saying has a very direct and vital bearing upon what you have called the Birlstone Mystery. In fact, it may in a sense be called the very centre of it."

MacDonald smiled feebly, and looked appealingly to me. "Your thoughts move a bit too quick for me, Mr. Holmes. You leave out a link or two, and I can't get over the gap. What in the whole wide world can be the connection between this dead painting man and the affair at Birlstone?"

"All knowledge comes useful to the detective," remarked Holmes. "Even the trivial fact that in the year 1865 a picture by Greuze entitled La Jeune Fille a l'Agneau fetched one million two hundred thousand francs--more than forty thousand pounds--at the Portalis sale may start a train of reflection in your mind."

It was clear that it did. The inspector looked honestly interested.

"I may remind you," Holmes continued, "that the professor's salary can be ascertained in several trustworthy books of reference. It is seven hundred a year."

And so the game is afoot and another mystery begins to unravel in the hands of the great detective. Greuze, born on this date in 1725, once stood among the biggest names of 18th century art. How his genre scenes, such as The Village Agrees (above), from 1761, showing the village elders agreeing to allow the young beau to take the young village lass’ hand in marriage, and his masterful portraits fell out of favor remains a mystery. 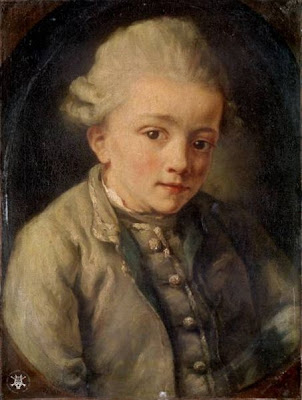 Greuze painted in the middle of the early Enlightenment period in France, just as a heightened sense of humanism began to question monarchies and revolutions began to roll forward. Many of the famous people of the age sat before him for a portrait. Greuze’s portrait of the seven-year-old Wolfgang Amadeus Mozart from 1763 appears above. Pushed by his ambitious father, Mozart already performed for the crowned heads of Europe as a virtuoso pianist and fledgling composer. On the other end of the age spectrum, Greuze paints the 71-year-old Benjamin Franklin (below) in 1777, while Franklin charmed the French royalty for their assistance against the British in the American Revolution. (On the same trip, Franklin charmed the French ladies for a different kind of “assistance.”) Greuze’s portrait of old Ben shows the elder statesman with grace and dignity, sans the fur cap that he affected in his attempt to play the colonial “savage” loosed upon the people of Paris. 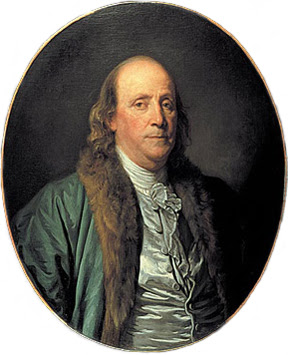 Although Sherlock felt that “[m]odern criticism has more than indorsed [sic] the high opinion formed of him by his contemporaries,” Greuze today seems lost in the sea of great portraitists of that time. In the middle of the French Revolution, Greuze seemed outdated, many of his portraits symbols of an elitist past and his genre paintings too simple for the bravado of the brave new world. He attempted some classical history paintings fraught with contemporary meaning, ala Jacques-Louis David, but never achieved the same propagandistic effects. Perhaps that inability to stir up the revolutionary emotions that soon boiled over into “the Terror” says something positive about Greuze, and something negative about David.

Who knows where to download XRumer 5.0 Palladium?
Help, please. All recommend this program to effectively advertise on the Internet, this is the best program!