The Importance of Being Caricatured 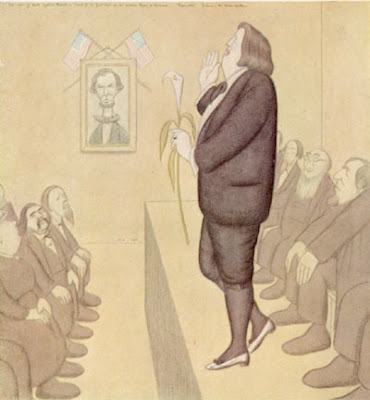 Max Beerbohm, born on this date in 1872, poked fun at and took part in the most exclusive circles of Victorian art and culture. Almost a professional partygoer, Beerbohm was the fly on the wall who could affectionately parody the great artists, all while denying his own talents. In his series of images titled Rossetti and his Friends, Beerbohm took aim at the Pre-Raphaelite Brotherhood surrounding Dante Gabriel Rossetti. Above, in the drawing long-windedly titled The Name of Dante Gabriel Rossetti Is Heard in for the First Time in the United States of America, Oscar Wilde promotes the merits of Rossetti before an American audience during his tour there as a dour portrait of Abraham Lincoln looks on. 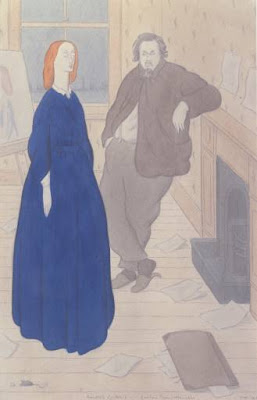 “Be it remembered that long before this time there had been in the heart of Chelsea a kind of cult for Beauty,” Beerbohm once wrote of Rossetti’s circle. “Certain artists had settled there, deliberately refusing to work in the ordinary official way, and `wrought,' as they were wont to asseverate, `for the pleasure and sake of all that is fair.' Little commerce had they with the brazen world. Nothing but the light of the sun would they share with men. Quietly and unbeknown, callous of all but their craft, they wrought their poems or their pictures, gave them one to another, and wrought on. Meredith, Rossetti, Swinburne, Morris, Holman Hunt were in this band of shy artificers. In fact, Beauty had existed long before 1880. It was Mr. Oscar Wilde who managed her de'but.” The trials and tribulations of the Pre-Raphaelites, perhaps the preeminent soap opera of art history, provided more than enough material for Beerbohm to attack. Beerbohm deflates much of the puffed-up super-seriousness of the Victorians, who were keen on grand proclamations and spat manifestos on aesthetics as easily as breathing. Rossetti’s Courtship (above) recreates the moment when the artist began his passionate pursuit of his model Elizabeth Siddal, but mercifully avoids the details of her untimely end. 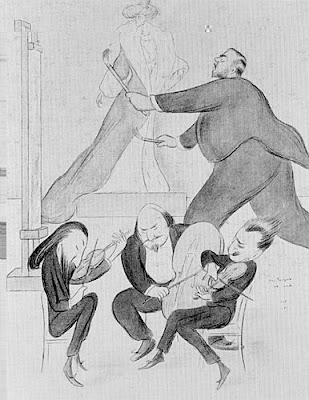 Beerbohm’s omnipresence in the Victorian age always reminds me of Woody Allen’s character in Zelig. Somewhere in the picture you will always find Max, recording the quips and quirks around him for posterity. His Mr. Sargent at Work shows John Singer Sargent painting a wealthy patron to the accompaniment of string instruments, something Beerbohm himself witnessed. Beerbohm’s work gives us a glimpse at the other side of the Victorian façade, revealing the humanity and humor of these memorable artists.