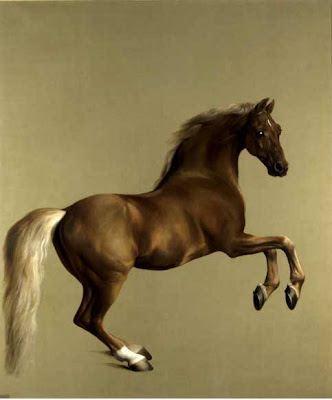 Perhaps the greatest painter of the horse ever, George Stubbs was born on August 24, 1724. Stubbs parlayed his lifelong interest in art and anatomy first into a series of medical illustrations for a midwifery text and then into a text on horse anatomy. With his beautifully detailed horse illustrations, Stubbs hit equine gold. Whistlejacket (above), commissioned by the Third Marquess of Rockingham, shows Stubbs amazing ability not only to present horses in all their anatomical wonder but also his ability to capture the sense of personality of these animals that endeared them to their owners. The gratitude of these owners made Stubbs a very, very wealthy artist. 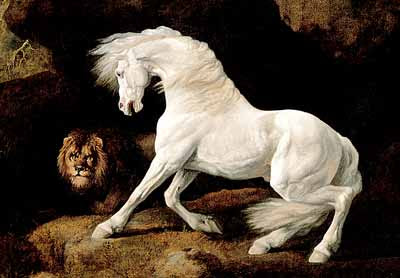 Although Stubbs name is now synonymous with his equine paintings, he also painted other animals, including lions, tigers, giraffes, and even monkeys. Stubbs’ Horse Frightened by a Lion (above) belongs to a series of paintings in which he pitted frightened horses against the king of the jungle. Exotic animals from the jungles of Africa toured England and Europe throughout the 18th century as curiosities and presented Stubbs with an opportunity to expand his repertoire. I’ve always wondered if Eugene Delacroix knew of Stubbs’ paintings of lions and tigers and horses battling. The many late works of Delacroix showing such scenes definitely belong to the fevered Romantic style of his era, but you can also see some early Romantic drama in Stubbs’ blazingly white stallion rearing away from the lion emerging from the darkness. 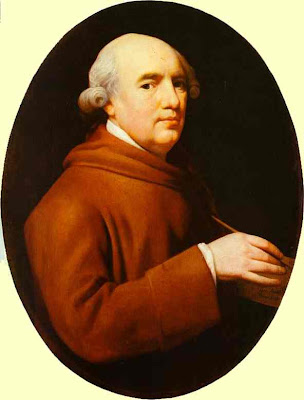 Despite attempts at pastoral landscapes and history painting, Stubbs fell prey to his own success and never truly escaped the label of the painter of horses. Like Edward Hicks with his Peaceable Kingdom series, Stubbs will always be a one-hit wonder. I like to imagine some frustration on Stubbs’ face in his Self-Portrait from 1781 (above), presenting him as an acclaimed, wealthy, and perhaps bored painter at the age of 57. Other painters have won some glory with paintings of horses (Rosa Bonheur comes to mind) and others have more accurately presented how horses move (such as Thomas Eakins in his A May Morning in the Park [The Fairman Rogers Four-in-Hand]), but perhaps no one else knew the horse from the inside out, from its heart to its soul, the way that Stubbs did.