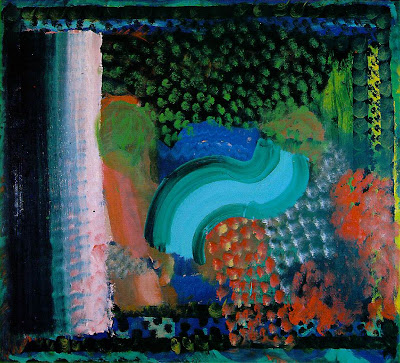 “The picture is instead of what happened,” Sir Howard Hodgkin once said. “We don’t need to know the story, generally the story’s trivial anyway. The more people want to know the story, the less they’ll look at the picture.” Hodgkin, born on August 6, 1932, takes the trivial stories of his life and creates beautiful paintings and prints, such as In the Bay of Naples (above) from 1980-82. Using a style that now known as Intimism, Hodgkin hints at the intimate details of his life as allusively as he paints them. The title of In the Bay of Naples prepares us for the shining water and brilliant sun of Italy, yet the painting itself delivers all color and brilliance without giving us enough “factual” detail to decipher what is really going on. This false intimacy allows Hodgkin to reveal and yet not reveal the facts of his private life. 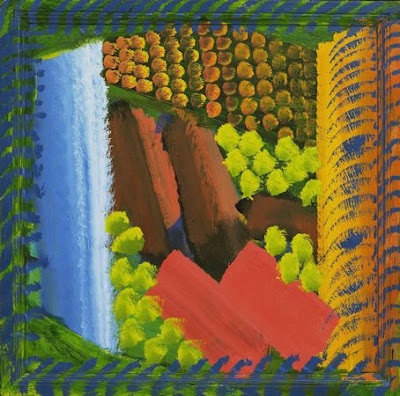 In Red Bermudas (above), from 1978-80, the “Red Bermudas” in question could be the orange circles at the top standing in for Red Bermuda onions. Or, if you see the two diagonal columns on the left as sunburned legs, the Red Bermudas could be the Red Bermuda shorts from which those legs issue. Hodgkin loves to play with these visual puns, making the viewer play guessing games and forcing the viewer to delve deeper and deeper into his pictures. This intellectual side of Hodgkin comes from a long family history of intellectuals. One side of Hodgkin’s family history extends to the Huxleys and the other side embraces the Fry family, including art critic Roger Fry. Sir Howard’s grandfather, Thomas Hodgkin, first described the disease that bears his name—Hodgkin’s Disease. From such an illustrious history, it’s easy to see where Hodgkin got his brainy side. 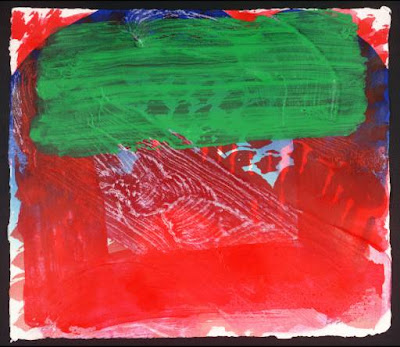 In addition to oil paintings, Hodgkin brings his intimism to printmaking, as in Strictly Personal (above) from 2001. As with the oil paintings, Hodgkin fills the image with wonderful color in the spirit of Matisse, but going much further into abstraction than Matisse ever did. The code of Strictly Personal seems intentionally harder to break than many others. The most easily understood object is the red frame, but what lies inside that frame remains a secret for the initiated. Some critics see Hodgkin’s private nature as related to his homosexuality, which he himself keeps strictly personal. Works such as Strictly Personal perhaps long for a time when introspection and personal space were valued, before the modern media age of the paparazzi and the “reality” show. Hodgkin’s work is a reality show of its own, but seen through the distorting and transforming lens of art.