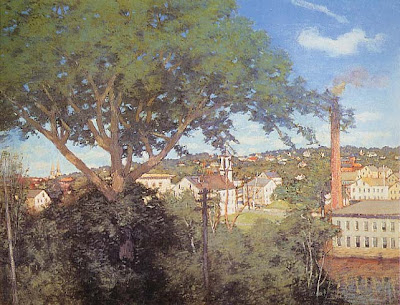 J. Alden Weir, one of the first true American Impressionists and an important figure in the development and acceptance of Impressionism in America, was born on August 30, 1862. While studying in Paris under Jean-Leon Gerome, Weir first encountered the Impressionist style and brought it back with him to America and his native New England. Works such as Factory Village (above) from 1899 resemble French Impressionism in their soft focus on nature, but add the American element of industrial progress in the inclusion of a factory peeking through the flora. This realist touch may have come from Gerome, who also taught America’s preeminent realist of the late 19th century—Thomas Eakins. 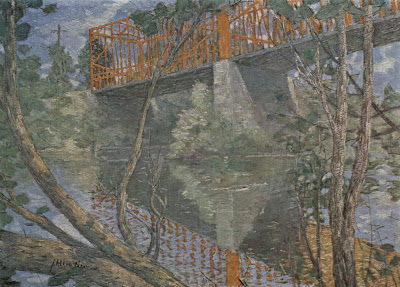 In many ways, Weir acted as a bridge over which Impressionism could flourish in America. (His Red Bridge, from 1895, appears above.) When Duncan Phillips first began forming the collection known today as The Phillips Collection, Weir steered him towards collecting not only the prominent French Impressionists, such as Monet, but also towards appreciating American Impressionists such as his friend John Henry Twachtman. Phillips, of course, recognized Weir’s own talent and collected his works, too. Present-day appreciations of American Impressionism in the late 19th century owe much to Weir’s ground-breaking efforts at the time. Without his championing, who knows what works and artists could have been lost to the mists of time. 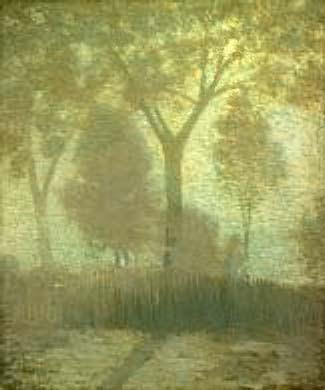 As Weir grew older, his works took on more and more of an atmospheric, almost Whistler-esque look, such as in his Moonlight (above) from 1905. Weir’s greatest talent, however, may have been in creating communities, such as the Impressionist community that grew up around him and Twachtman in New England. Weir’s connections throughout the art world were incredible (a funny picture of Weir with his friend John Singer Sargent and a portrait of Weir by Sargent are here). In 1912, the Association of American Painters and Sculptors elected Weir as their first president. Sadly, he resigned in 1913 after the Association helped sponsor the 1913 Armory Show in New York that ushered in the age of Modernism in America. After trying so hard to get Americans to embrace Impressionism, which seems hard to believe today, Weir couldn’t stand being upstaged by the new ways of seeing.