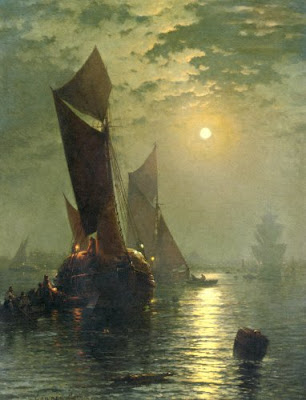 When he traveled in 1861 with his brother Thomas to England to study painting further, little did Edward Moran know that his encounter with the works of J.M.W. Turner on display in London would influence the rest of his career. Whereas Thomas used his training to capture the glory of the virginal American West in his paintings, Edward, born on August 19, 1829 took to the high seas, painting picturesque maritime scenes such as Moonlight on the Thames With a View of St. Paul’s in the Distance (above) from that fateful year of 1861. Moran soon returned to America and began painting the sea from that side of the Atlantic. Moran emigrated to the United States from England in 1844 and settled in Maryland before moving on to Philadelphia and later New York City. Living in the antebellum North, Moran got a good view of the political turmoil leading up to the American Civil War. The war was in full swing when he returned from his studies in England in 1861. Moran paints The Morning After the Gale (above) in 1865, perhaps to symbolize the end of the dark clouds of the Civil War and the onset of the hopeful clear skies of peace. Moran never gets as quasi-abstract in his seas or skies as Turner eventually did, but he does reproduce some of the emotional charge of the conflict of water and wind, writing in the clouds the darkest and brightest moments in people’s hearts. 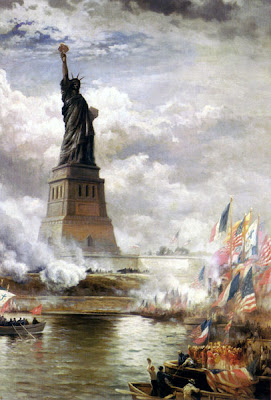 Moran’s patriotism for his adopted country appears in his The Statue of Liberty Enlightening the World (above). This 1886 painting shows the moment of Lady Liberty’s unveiling, specifically the 21-gun salute announcing President Grover Cleveland’s landing on Bedloe’s Island (now Liberty Island). Accounts of that day say that rain fell on the festivities, but Moran here paints clear skies, interrupted only by the rising statue and the smoke of the guns’ salute. Edward Moran brought not only the style of Turner across the waters but also an idealism and iron-clad faith in the democratic experiment that perhaps only an immigrant can maintain.