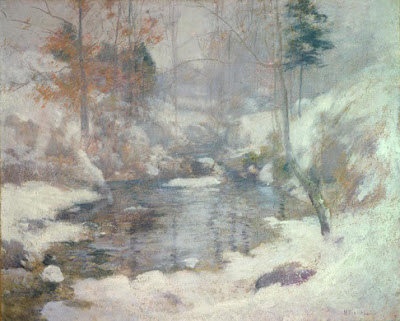 Of all the American Impressionists that I love, John Henry Twachtman, born August 4, 1853, may be my favorite. Twachtman brings a beautifully delicate style to his Impressionism combined with a true sense of spirituality. His Winter Harmony (above) shows how masterfully he could create an entire world of whites and bring a winter scene to life in all it’s harmonious glory. He seems to have earned a reputation as being difficult during his lifetime, but I prefer to see that difficult streak as more demanding—of himself and of others pursuing a career in art. 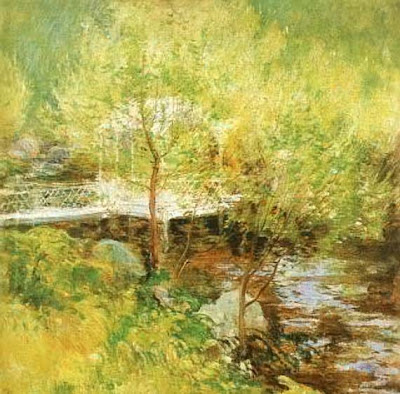 Despite his capacity for curmudgeonry, Twachtman established many close friendships with fellow artists. J. Alden Weir and Childe Hassam, two other great American Impressionists, remained close to Twachtman up to his early death at the age of 49 from a brain aneurysm. Weir introduced the young Duncan Phillips to the art of Twachtman after Twachtman’s death. Phillips began adding Twachtman’s work to what would become the Phillips Collection obsessively, regretting that he never got to meet the man himself. Works such as The White Bridge (above) show Twachtman’s ability not only to capture the American landscape in all its delicacy and wonder but also to infuse it with the spirituality he himself felt deeply. Twachtman’s commitment to his artistic ideals led him to help form the separatist group “The Ten” after he felt that the establishment Society of American Artists had turned too conservative. 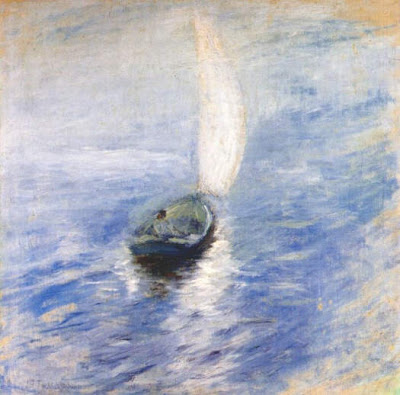 The Twachtman painting that haunts me the most is his Sailing in the Mist (above). When I saw this painting at a PAFA retrospective of Twachtman’s work years ago, it etched itself on my imagination. After the death of one of his children, Twachtman searched for a way of expressing his grief and arrived at the image of a small boat drifting off into the mist. I’ve always seen Twachtman in a different light since encountering that painting, and believe that it might be the best imaginative voyage into “that undiscovered country from whose bourn no traveler returns” ever done by an American. Sadly, Twachtman himself took that final voyage much too early, leaving us only a glimpse of what he could have produced.