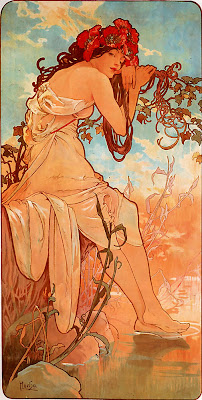 One of my annual Christmas gifts to Annie, my wife, is a calendar of one of her favorite artists—Alphonse Mucha, born on this date in 1860 in what was then known as Moravia, later Czechoslavakia. Mucha epitomizes the beauty of the Art Nouveau style. The women in Mucha’s paintings and illustrations become goddesses in his hands, such as the embodiment of Summer (above) from 1896, part of a series of the four seasons. The organic swirls of the tendrils of hair echo the greenery around these figures, harmonizing humanity and nature. Decadence almost oozes out of these images. Mucha, however, was more than just a painter of pretty pictures.

After moving to Paris in 1887, Mucha became involved in the theater, especially posters promoting the greatest talents of the Paris stage. Sarah Bernhardt, perhaps the most famous actress of that era, found her creative soul mate in Mucha, who created indelible images of her work in such roles as Medea (above). Although of Slavic descent, Mucha flourished on French soil, becoming an integral part of the art scene. He befriended Paul Gauguin and even shared a studio with him after Gauguin’s return from Tahiti in 1893 (an arrangement that turned out much better than Gauguin’s previous experience with Van Gogh). Mucha’s work appeared everywhere, on posters and even commercial advertising. (A collection of some of these beautiful images appears here).


Mucha, however, always remained a Slav at heart. In 1911, he began a series of paintings collectively known as his Slavic Epic. After the Battle of Vitkov: God Represents Truth, not Power, Mucha’s condemnation of the wars that have marred centuries of Slavic history, appears above. When an independent Czechoslovakian state emerged in 1918, Mucha designed the first stamps and currency for the fledgling nation. Mucha presented his complete Slavic Epic to the people of Czechoslovakia as a gift in 1928. Sadly, when the Nazis invaded Czechoslovakia in 1939, Mucha was among the first citizens arrested. Although he was soon released, the experience took too much of a toll on his health and he soon died. The Nazis banned the public from attending Mucha’s funeral, but 100,000 Czechs defied that ban to pay tribute to their great national artist. To the end, Mucha represented truth in his love of country and dedication to art, despite the powers aligned against him.
Posted by Bob at 6:24 AM