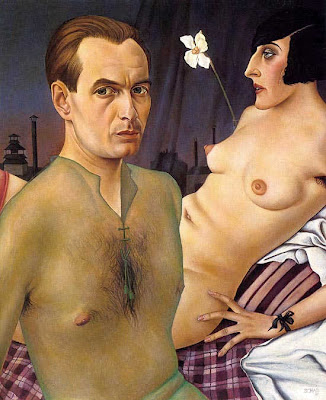 Christian Schad, born August 21, 1894, used his clear eye and steady hand to portray the decadence of the Weimar 1920s in Germany. Along with Otto Dix, George Grosz, and Max Beckmann, Schad painted in the Neue Sachlichkeit or “New Objectivity” style that strived to hold a mirror up to the chaotic society around them. But, where Dix, Grosz, and Beckmann twisted their visions to mimic the twisted soul of the Weimar years, Schad brings an almost Old Master realism to his works, believing that only the objective truth was necessary. Sometimes, he even turned that clear eye on himself, as in the Self Portrait from 1927 (above). Clad in a bizarre see-through shirt with a naked, scarred woman behind him, Schad shows himself taking part in the sexual deviancy of the time that was only a symptom of the larger issues at hand. 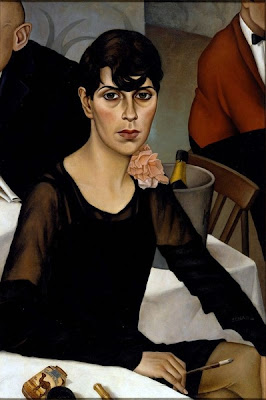 Schad excelled at showing the cabaret life of the 1920s in Vienna and Berlin, his two bases of operation during that decade. Sonja (above), from 1928, shows a typical pseudo-flapper in a café, smoking a Camel cigarette with a long holder, the advertising symbol of the camel clearly showing on the package sitting on the table. The hardness and hopelessness of these years comes through the definition given these faces. He paints an eerie lifelessness into their eyes, a deadness sinking down into their souls. Grosz’s work more colorfully captures the cacophony of the café patrons longing to drown out the sound of their own soul-sickness, but Schad’s portrayals capture the quiet desperation behind all the noise—the lonely moments experienced in even the largest, loudest crowds. 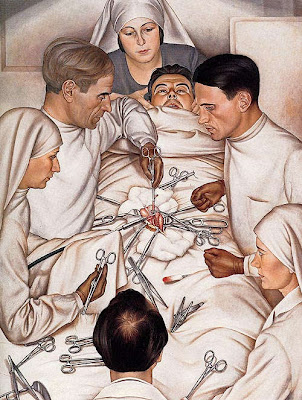 There’s a surgical precision to much of Schad’s realistic explorations of the Weimar psyche. Like the vulnerable patient in his 1929 Operation (above), the Germany of the 1920s seemed anesthetized to the chain of events happening within that would lead to the rise of Adolf Hitler and the Nazi movement. Ironically, thanks to his more realistic painting style, Schad eluded the label of “Degenerate Art” that stuck to Grosz and others, driving them and their art from Germany at the moment they were needed most. Schad continued to paint portraits throughout World War II (he faked a heart ailment to escape fighting in World War I) and returned to his Dada roots and his photographic experiments in photograms, which he dubbed his “Schadograms.” These “Schadograms” occupied much of his artistic imagination for the rest of his long life, perhaps as an escape into abstraction from the memories of his realist depictions of the road to Germany’s self-destruction.