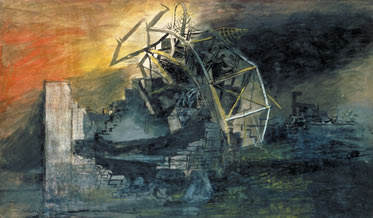 Steeped in the images of William Blake and Samuel Palmer, Graham Sutherland developed a spiritual vision of nature around him, taking those natural forms and twisting and torqueing them with the pulsating life he saw within. Sutherland, born on August 24, 1903, soon distorted those natural scenes so much that he was tagged as the English Surrealist, and even exhibited with Surrealist groups. When the world itself turned surreal in the dark days of World War II, Sutherland’s friend, the art critic Sir Kenneth Clark, found work for him as a war artist for Britain. The City: A Fallen Lift Shaft (above) shows London during “the Blitz,” a nightmare wasteland of shattered walls and twisted metal. Sutherland’s imaginative world had merged with his real one, but with a sad, sad difference. 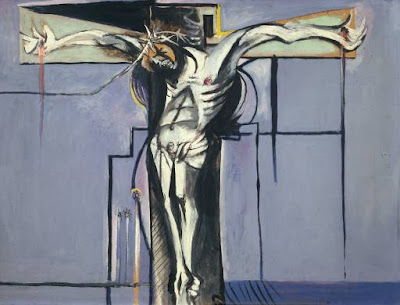 In 1946, Sutherland received a commission to paint a crucifixion scene for for St. Matthew's Church in Northampton, England. The result (above) created a new paradigm for religious art in England. Sutherland captured the pathos and disjointed psyche of the postwar world in his Crucifixion as aptly as Matthias Grunewald had expressed the agony of his age in his Isenheim Altarpiece. Sutherland’s Crucifixion was later moved to the Tate Museum, where it stood next to the work of Francis Bacon, whose own triptychs expressed the same angst as Sutherland’s work. Bacon clearly felt the influence of Sutherland, and Sutherland befriended and championed Bacon very early on in the younger artist’s career. 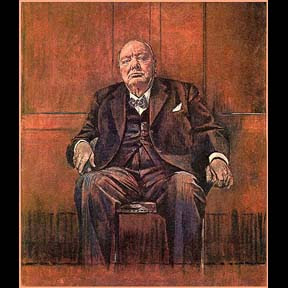 Sadly, not everyone was ready for Sutherland’s type of painting. To celebrate the 80th birthday of Winston Churchill, the British government commissioned Sutherland to paint his portrait (above). Churchill hated it. Churchill’s wife hated it even more and actually destroyed it. This portrait of Churchill clearly shows the cross-influence of Bacon’s portraits, injecting a sense of menace and anxiety into what the British government and the Churchills were hoping would be a laudatory portrayal. Instead, Sutherland seems to merge Churchill’s image with his Crucifixion, affixing the stain of the war onto the visage of the wartime leader, irreversibly bonding the two, just as the two had become irreversibly bonded in the popular imagination. Whereas the authorities wanted a glorified vision of the war years, Sutherland’s honesty and clear-eyed view of war’s destruction could only show those years for the horror that they were.