With Fearless and Eager Eyes 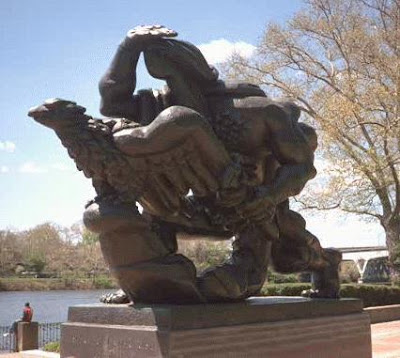 On August 30, 1891, in tiny Druskininkai in Lithuania, still under the rule of the Russian Tsars, Jacques Lipchitz was born. Lipchitz created some of the most beautiful Cubist sculptures ever made. Many of Lipchitz’s works grace the Philadelphia region, including The Spirit of Enterprise (above), which stands on the banks of the Schuylkill River along Kelly Drive, near Boathouse Row. At the base of the sculpture, the following quote from Theodore Roosevelt appears: “Our nation glorious in youth and strength looks into the future with fearless and eager eyes as vigorous as a young man to run a race.” From his humble beginnings to his prime in Paris to his American years after World War II, Lipchitz always looked “into the future with fearless and eager eyes” and never gave up his sense of wonder and hope for the world. 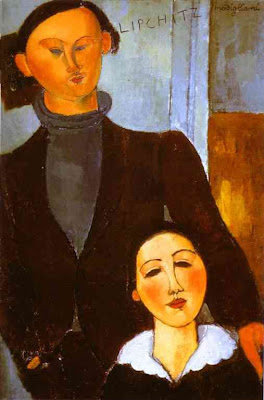 Lipchitz flourished among the artists of Montmartre and Montparnasse in the 1910s and 20s, befriending fellow Cubists Pablo Picasso and Juan Gris, among others. In 1922, Dr. Albert C. Barnes visited Lipchitz’s studio and not only bought several works but also commissioned a series of bas-reliefs for The Barnes Foundation. In exchange, Lipchitz introduced Barnes to his friends Chaim Soutine and Amedeo Modigliani. (Modigliani’s portrait of Lipchitz and his wife is above.) Thanks to this introduction, Barnes purchased several works by Soutine and Modigliani, helping bring not only Lipchitz’s stirring Cubist sculpture to America but also the works of these two unique masters. 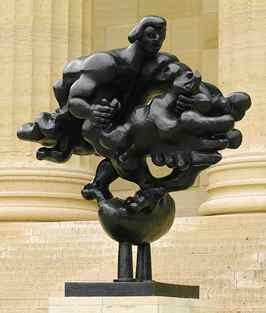 Lipchitz fled Paris in 1940 with the help of American journalist Varian Fry just before the Nazis invaded. America became Lipchitz’s home for the rest of his life, and Philadelphia captured a special place in his heart. I’ve always loved his The Spirit of Enterprise and Government of the People (which stands in the Municipal Services Building Plaza in Philadelphia, near JFK Boulevard and Broad Street), but my favorite Lipchitz will always be his Prometheus Strangling the Vulture (above), which stands proudly at the top of the PMA’s famous “Rocky Steps.” Lipchitz takes the ancient myth of the vulture endlessly torturing Prometheus and rewrites the ending, allowing Prometheus to gain the upper hand and end his torment. Lipchitz’s sculptures always maintain this wonderful spirit of hope, even in the face of war and oppression, which has made him one of the most popular and accessible of modernist sculptors.
Posted by Bob at 6:09 AM