Blowing Your Mind on Art 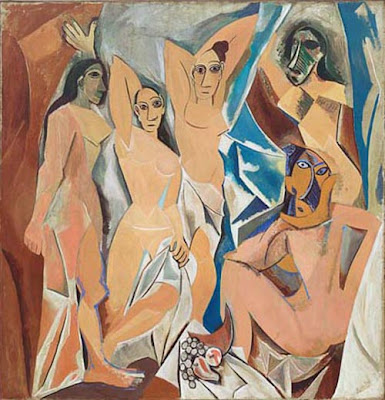 Why do people look at art? Why do only people look at art, and not animals? Why have people been looking at art for centuries? Or, as Terrence Deacon asks more academically in his essay in The Artful Mind: Cognitive Science and the Riddle of Human Creativity, “Why is it that only human beings spend time and effort to produce and acquire aesthetic experience?’ The Artful Mind collects essays written by scientists who gathered together at The Center for Advanced Study in Behavioral Sciences at Stanford University in 2001 and 2002 to try to answer some of these questions with empirically “hard” science centering around consciousness and neurology.

Deacon takes a stab at answering his own question: “The mind transfigures [emotional experiences] by symbolically re-representing them [in art].” These “transfigured emotions constitute a major organizer of human social behavior.” Thus, “[i]n many ways, the arts appear to continually expand the space of emergent emotional states we can experience. This ever-expanding exploration of newly emergent experiences is clearly one of art’s great attractions. It is literally an exercise in expanding the space of consciousness.” Once one allows the primacy of art in such consciousness expansion, you can see a clear progression from the cave paintings of our ancestors, to the realism of the Greeks and Middle Ages, to the modernist explorations of 20th century art. Works such as Picasso’s Les Demoiselles d'Avignon (above) thus become more than just a painting—they become a whole new way of seeing and thinking, an evolutionary leap of consciousness. Seeing art as wholly educational and never “art for art’s sake,” places a greater weight on the need for arts education in the world.

The intellectual component of art’s value is clear. In addition to Deacon’s view of art as “expanding the space of consciousness,” Mark Turner, the editor of the book, argues that the skills of compression and integration demanded by art give us access to “forbidden fruit” not present in physical reality, opening a door onto the possible through our imagination, not only in the field of art but that of technology. Marc de Man, in his essay “Mastering Ambiguity,” sees ambiguity—“this capacity to bring together unrelated and even apparently incompatible representations”—as “the most powerful feature of the modern mind.” de Man believes that, although both art and science “require this ability to bridge different kinds of representations, ... art was the more prototypical achievement, a kind of precursor to science.” With that belief, The Artful Mind bridges the gulf between “soft” aestheticism and “hard” science so firmly established in mainstream thinking. 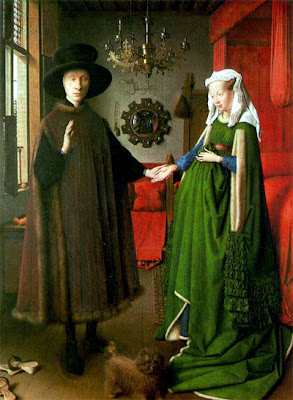 de Man’s essay, the closing work and perhaps the most interesting from an art history perspective, points to Old Masters such as Masaccio and Jan Van Eyck as masters of ambiguity from a practitioner’s perspective. It was eye-opening to have it pointed out again that concepts such as perspective are not givens in reality but rather forms of ambiguity that we have become comfortable with. In works such as The Arnolfini Portrait (above), Van Eyck portrays mirrored chandeliers and receding lines in space through the use of ambiguous tricks of the trade to transform two-dimensional lines into a believable three-dimensional world. Van Eyck’s mastery of ambiguity, as well as our ability to accept and read that ambiguity, mark a watershed achievement in human consciousness.

In addition to this intellectual component of art and consciousness, there is an emotional one—the development of what some call our emotional IQ. David Freeberg examines the relationship between composition and emotion, specifically “how pictures look and the emotional responses they evoke,” using the painted compositions and compositional theories of Nicolas Poussin as a perfect example of this relationship in action. Shirley Brice Heath, in her essay, “Dynamics of Completion,” persuasively argues how art makes us all more emotionally open and empathetic. “Art seems ultimately to be about playing as if we humans could step outside the bounds of our physical limitations by opening the imagination to take on the role of seeing and being others,” Heath writes, stressing the power of art to foster the power of empathy to place us in one another’s shoes. “All art enables acting as if… Art always pushes toward some sense of connection and completion.” It is this connective, completing power of art that truly makes us more human for knowing it, and perhaps less human for our ignorance of it.

I am, of course, greatly simplifying much of these theories. The Artful Mind is a challenging book and can strain even the most hardened hard-core art fanatic striving towards the end of its technical labyrinth. In many ways, this is the technical version of Nigel Spivey’s How Art Made the World television series, which took many of these concepts and popularized and visualized them for a wider audience. Spivey’s approach also allowed for some editorializing, particularly when acknowledging art’s power to manipulate emotion for both positive and negative ends through the phenomenon of propaganda. The Artful Mind avoids such digressions and keeps to a narrow path in the name of scientific objectivity.

In many ways, The Artful Mind reminded me of Harold Bloom’s Shakespeare: The Invention of the Human. Many critics mischaracterized Bloom’s claims as if he believed that Shakespeare’s works actually created the emotions that modern humans display. (Bloom helped this confusion along, just to be outrageous and sell books.) But I think that Bloom’s critique of Shakespeare’s influence on and contribution to the development of consciousness gains some clarity in the light of The Artful Mind’s claims. Rather than “inventing” such emotions, Shakespeare re-represented them, staging them so that we, the viewer/reader, can see them more clearly from a distance and learn more about them objectively and apply that knowledge to ourselves subjectively. This interplay of art and art lover spins around and around throughout time, explaining in many ways the lasting power of true art. What Lawrence Zbikowski calls in his essay “the cognitive tango” of “the intimate dance… between music, mind, and brain” applies to all the arts. And let the music, and the dancing, never end.

The Artful Mind takes concepts most art lovers “know” in their hearts—that art is food for the mind and the soul—and places them in more objective, scientific terms, yet without sucking out the poetry or, to paraphrase Wordsworth, murdering to dissect.


[Many thanks to Oxford University Press for providing me with a review copy of this book.]
Posted by Bob at 5:48 AM

It is an incredible work your`s artblogbybob. Very much thanks for the writing.

I'm glad that you and the other Art and Perception folk (if that's how you found me) took the time to come over and take a look.