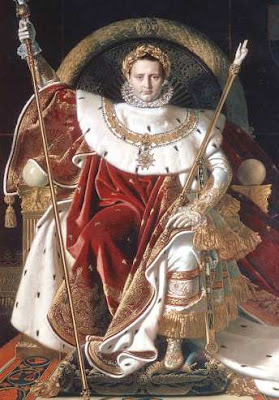 Seeing himself as a “conservator of good doctrine, and not an innovator,” Jean Auguste Dominique Ingres, born on this date in 1780, painted in a Neoclassical style amidst the heat and fury of the French Revolution raging about him. While contemporaries such as Jacques-Louis David painted propaganda to enflame the masses, Ingres painted royalist portraits such as his 1806 Napoleon I on His Imperial Throne (above) to cool things off. David, of course, hated this portrait of Napoleon, which undid all of the revolutionary rhetoric his paintings built up around the leader. Ingres’ portrait showed Napoleon in perhaps truer colors, as a man comfortable with the trappings of power—exactly the type of leader the revolution just deposed. Perhaps Ingres’ portrait was the more honest of the two. 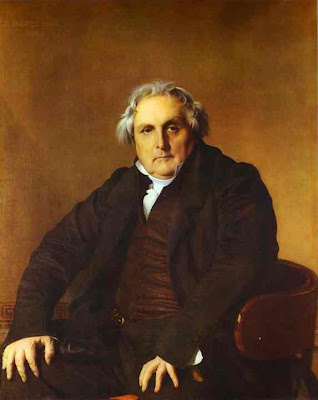 I’ll never forget seeing Ingres’ portrait of Louis-Francois Bertin (above) at the Louvre in person. The almost photographic smoothness of the canvas and the way Ingres built up the planes of each person’s face are unforgettable. You can’t walk away from an Ingres without acknowledging his technical ability. At the same time, you also feel a slight chill when you look into the eyes of his subjects or follow the contours of their faces closely. Ingres’ people lack the warmth of other portraits that I admire. It’s more than a rejection of Romanticism. It’s a lack of empathy. I believe that his portrait of Mme. Moitessier from 1856 may be one of the most dazzling performances of 19th century portraiture in terms of reproducing textures and surfaces (and the work with the mirror image in the back is just showing off). But even good Mme. Moitessier doesn’t seem like she’d be good company at dinner. 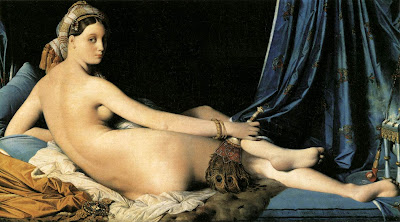 Ingres’ chilliness extends even to his masterful nudes, adding a la belle dame sans merci quality to their eyes and gestures. In La Grande Odalisque (above), from 1814, Ingres makes himself a liar and indulges in some innovation, extending the magnificent back of his subject by a few vertebrae to create the beautiful lines of his composition. He does it so masterfully that at first glimpse you don’t even notice. Ingres allowed himself such liberties too infrequently. As Sir Kenneth Clark pointed out in his The Nude, Ingres’ La Grande Odalisque and its free approach to the nude remains one of the touchstone nude images of Western art, inspiring later artists from Edgar Degas to Pablo Picasso to take similar liberties in their own artistic explorations of the female form. 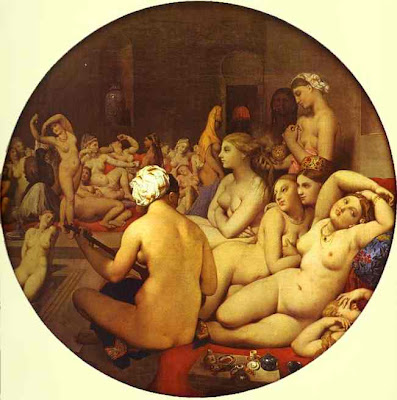 I find much of Ingres to be infuriating for this combination of genius with conservatism. As much as La Grande Odalisque is a step forward, works such as 1862’s The Turkish Bath (above) take two steps back. Again, the technique is beautiful, but the bath seems to have gone cold. Ingres drains away the exoticism and eroticism that Eugene Delacroix brought to similar scenes of Orientalism, such as his Death of Sardanapalus. Ingres paints like Pygmallion sculpting in reverse, turning warm flesh into cold marble. Sometimes I wonder if Ingres’ coldness increased as a reaction to the fires of revolution and Romanticism around him, his fear forcing him to paint even more beautiful yet more lifeless figures as the world around him seemed to spiral out of control.